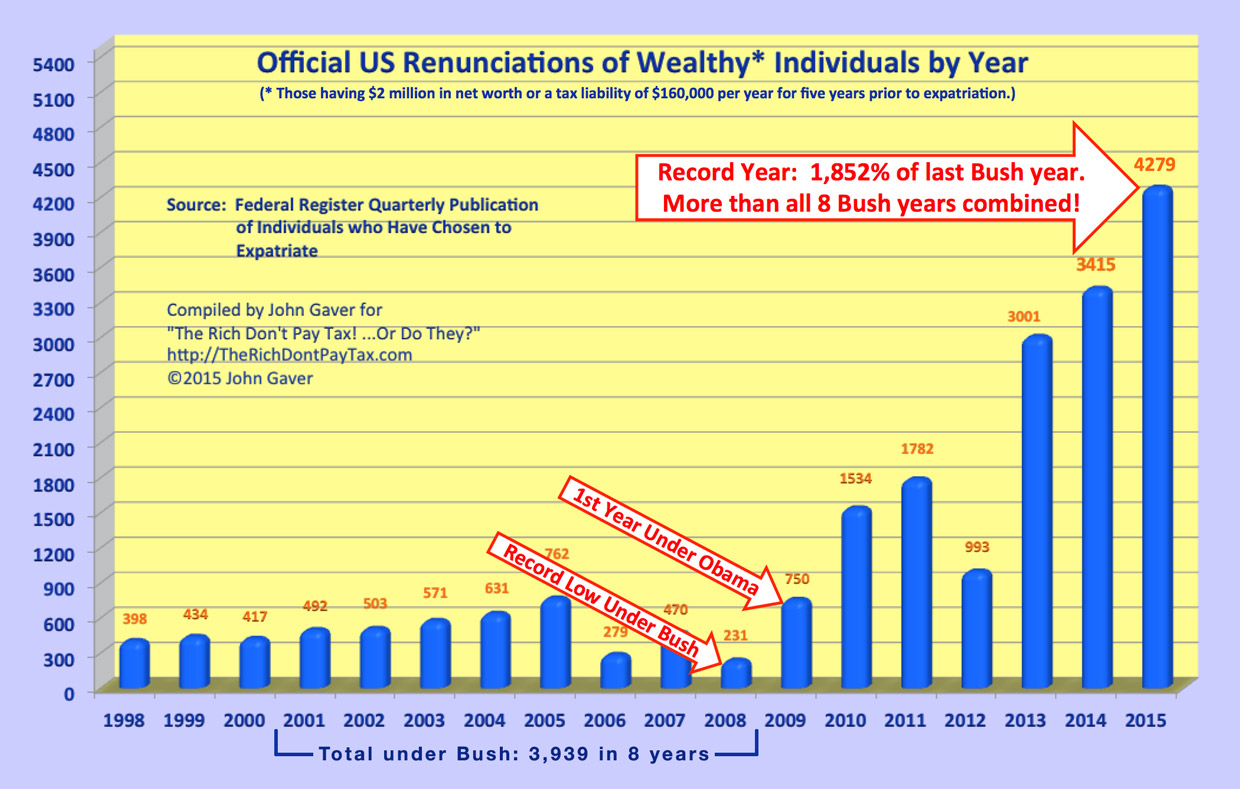 It finally happened. The number of formal citizenship renunciations of wealthy U.S. citizens, in just one year, has exceeded the total number of renunciations over all eight years of the George W. Bush Administration!

According to official government data, published in the Federal Register, 1,058 wealthy U.S. citizens formally renounced their U.S. citizenship in the last quarter of 2015, bringing the total for the year to 4,279 formal expatriations of wealthy Americans. That’s an 1,852% increase in the number of formal renunciations, over the last year of the Bush Administration (231) and it exceeds the combined total of all eight years that Bush was in office (3,939)! See the chart at the top of this page.

The list from which this information is drawn is the most recent publication in the Federal Register, of what is termed the “Quarterly Publication of Individuals, Who Have Chosen To Expatriate, as required by Section 6039G”. Links to each of those lists can be found on our Taxpat Lists Page.

The reason this is important is because these people who are leaving pay a disproportionally large part of the total tax load, paid in the USA. To be included on one of these lists in 2015, the individual had to fit one of the following criteria.

Let’s take a closer look at those criteria. The $2 million threshold is pretty clear. But consider that if we take the average tax rate paid by the top 1% of taxpayers and work backwards, we’ll find that a person who owed $160,000 in federal income tax for each of the last five tax years would almost certainly have had an income well in excess of $700,000 for each of those five tax years. Just look at that second criteria. These are people who pay more in federal income taxes than most Americans earn in two or three years.

The last criteria may allow a few other-than-wealthy people to get onto the lists. But those numbers should be extremely low. That’s because of the Bush Exit Tax, which we’ll get to in a few moments. You see, anyone who does not fit one of the first two criteria, but who also fails to file Form 8854, suddenly becomes liable for the Bush Exit Tax, from which they would otherwise be exempt, were they to file that form. Due to the Form 8854 requirement and the possibility of a government worker making a mistake, there is the possibility that there could be the occasional other-than-wealthy individual named on the list. But due to the tax liability issue, any such numbers will certainly be extremely low.

What this all comes down to is that to be on one of these lists, a person with that kind of net worth or annual income is almost certain to be in the top one-half percent of taxpayers. These are the people whose hefty tax bills make life easier for the rest of us and yet, Obama is driving these essential people out of the USA in record numbers.

It’s important to note that these numbers aren’t estimates. The Taxpat Lists, as they have come to be called by many expats, were mandated under the Health Insurance Portability and Accountability Act of 1996 (HIPAA – H.R.3103) and they name each wealthy expat. So from these lists, we now know, not just how many wealthy Americans renounced their citizenship each quarter, but we actually know the names of those people. This means that every number on the above chart represents exactly that many wealthy U.S. citizens, who walked into a U.S. embassy or consulate, somewhere in the world, turned in their passports, paid the Bush Exit Tax (part of the “Heroes Earnings Assistance and Relief Tax Act of 2008 (H.E.A.R.T.)“), and in doing so, ceased owing any further U.S. income tax liability on non-U.S. sourced income. Moreover, after renunciation, almost all of these people end up deriving all or most of their income from offshore sources. Therefore, this means that they pay little or no U.S. income tax, after renunciation.

For the record, according to the latest IRS Collections Data (tax year 2013), the top 1% of taxpayers (those who earned more than $428,713) paid 37.8% of all federal personal income tax collected that year. But remember that to be on the Taxpat Lists, one most likely has to have an income in excess of $700,000. So we’re not just talking about some “rather” rich people leaving. We’re talking about some “seriously” rich people leaving – generally those in the top half percent of taxpayers or better.

The question that we need to be asking is, “Who is going to pick up the tax load of those mega-taxpayers, when the mega-taxpayers no longer owe U.S. taxes?”

Since renunciations were on the way down, when Bush left office, it’s obvious that Obama’s “Soak the Rich” policies are responsible for this dramatic rise. Many years ago, lack of foreign business infrastructure forced the Rockefellers, Vanderbilts, and Morgans to stay in the USA and accept 90% income tax rates on the rich, if they wanted to make money. Back then, there was no other country in the world, where rich people could go and be able to make as much money as they were making here. But today, with the Internet, smartphones, and FedEx, the wealthy are no longer anchored to U.S. soil. Of course, congressional Republicans have to take part of the blame, since many of them helped pass the Foreign Account Tax Compliance Act (FATCA), that was a part of the HIRE Act of 2010 (H.R. 2847), which is driving many U.S. citizens who currently live and work abroad, to renounce their U.S. citizenship, just so they can maintain a bank account in the country where they reside and work.

At the heart of the problem is our tax system. Were it not for the taxation of income, Obama would not be able to move forward with his “Soak the Rich” agenda. Actually, the same applies to a Value Added Tax (VAT), like that proposed by Sen. Ted Cruz.

It’s time to end the system that enables such attacks on success. It’s time to abolish the income tax and the IRS. But as long as income is taxed, be it progressive, flat, or through a VAT, the IRS cannot be more than marginally reduced in size. On the other hand, without an income tax, the IRS goes away and it becomes impossible to target a particular income group.

Of the various tax reform plans, both in Congress and on the campaign trail, only the FairTax (H.R.25 / S.155) will or even can abolish the IRS. The FairTax makes the IRS superfluous, by turning over all federal tax collections to the states. The states would audit a portion of about 25 million retail businesses (as they currently do in 45 states) and a small sub-department within the Treasury Department would audit the 50 states. Nobody would audit you (unless you happen to own a retail business and then it would be the same state auditors that currently conduct your state sales tax audits).

NO IRS. No individual audits. No April 15th deadline. No compliance costs. No “Soak the Rich”. The total lack of a personal or corporate income tax would draw wealth and jobs back into the USA in record numbers. With more wealthy citizens spending their money on new retail products and services, and more people working, earning a salary, and spending that money, the tax load would be spread out more, so we could all pay less tax. Everyone wins… well, except the illegal aliens, who would be at a roughly 23% tax disadvantage, compared to entry level working citizens, since illegal aliens would pay the full 23% tax rate, without the benefit of the prebate, which would wipe out most or all of the taxes paid by those poor working citizens. The FairTax would be a WIN-WIN-WIN situation.

For more detailed information on this ominous trend, read, “The Rich Don’t Pay Tax! …Or Do They?”, available in print and popular ebook formats on Amazon, Barnes and Noble and through other booksellers or click one of the links on the left side of this page.