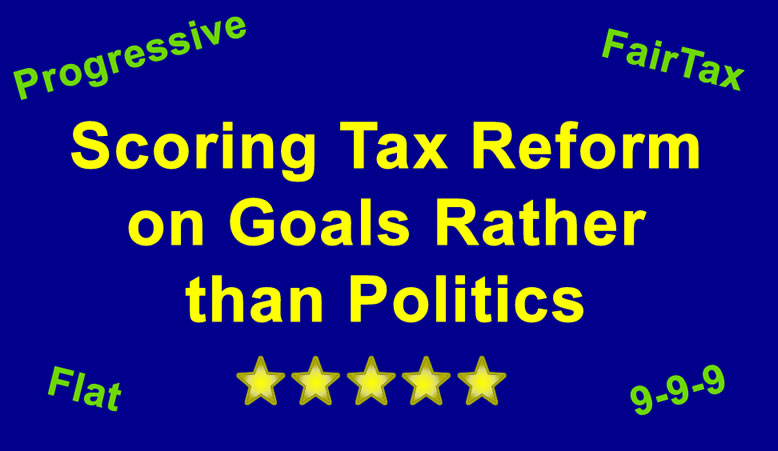 Those of varying political persuasions, be they liberal or conservative, will try to tell us why their chosen tax reform proposal is better than any other. But in most cases, the proponents of the various tax reform proposals limit their talking points to only a very narrow spectrum of economic analysis; specifically an area where their chosen proposal appears to hold an advantage. But when we take a broader look at how these proposals affect the rest of the economy, in a point-by-point analysis, most tax reform proposals fall apart.

So at “The Rich Don’t Pay Tax! …Or Do They?” (http://TheRichDontPayTax.com/), we decided to address tax reform from a “Goals-Based” perspective. This is how successful businesses make major decisions. Before trying to solve a complex problem, they define what will constitute success by establishing goals that are based on known and possible problems. Only then, after the goals have been defined, do they evaluate each potential solution, against those previously established goals. The method that best meets each of the previously established goals is the solution that they go with. This quantitative approach consistently provides the best possible solution, by eliminating any bias that certain people in management may have toward a particular plan or strategy.

Therefore, since “Goals’Based” evaluation of potential solutions is a time-tested and proven methodology, that’s the method that we decided to use to approach tax reform.

Interestingly, when we applied this proven “Goals-Based” methodology to tax reform, one proposal stood out far above the rest. In fact, the next best tax reform proposal scored only half as well.

The tax reform proposals that we examined were:

Note: For the purpose of this evaluation, we assume that in any flat income tax, there will still be a dependent deduction and that savings and investments won’t be taxed. Granted, this assumption may be expecting a lot of our lawmakers. But otherwise, a flat income tax would meet few of the goals for successful tax reform.

In the book, “The Rich Don’t Pay Tax! …Or Do They?“, 13 goals for successful tax reform were established and evaluated, using this method. Reader feedback indicated that this was considered to be one of the most persuasive parts of the book. As a result of this feedback, I decided to compress those chapters into a single abbreviated article. But before doing so, I submitted those goals to readers of our blog and asked for more suggested goals. Readers then contributed three more goals to the list. Although there is not space in this article to go into great detail, the results are still clear. Those goals are:

We invite you to add any reasonable goals for tax reform to this list and then compare the above tax reform proposals to those new goals. These should be general goals related to the economy. Then we invite you to go a step further and fairly compare any other tax reform proposal to these goals and any other goals that you can come up with. Regardless of the goals you choose and the types of proposals you evaluate against them, you’ll find that one of the above proposals leaves all the others behind.

Note: In order to take out any bias, be sure to add any additional goals that you think important, before you start your evaluation.

This quantitative methodology takes the politics and spin out of tax reform and makes it clear what will work and what won’t.

For the record, a number of years ago, when I first became interested in tax reform, the method that I thought best was different than what I believe to be best today. The change came a couple of years after I started looking into tax reform options, when I decided to use this proven problem-solving method to evaluate the various proposals. The results of my comparison, like you’ll see in this list, were so conclusive that I had no choice but to abandon the tax reform plan that I had previously championed. My own quantitative evaluation had made it suddenly clear what method of tax reform was needed. When you apply this proven method yourself, I’m sure you’ll agree, even if like me when I did it, you have to swallow your pride and change directions.

Use our star-ratings or apply your own star-ratings to the various proposals on this list. Either way, you may be quite surprised at the outcome.

In the end, there is one and only one type of tax reform that both qualifies as substantive and equitable tax reform and that will produce the kind of positive economic results that we need to see. Click through the steps on this list to learn what it is. Each of the following pages covers just one of the goals listed above, with the last page being a summary.