Just a few days ago, on July 1 of this year, the “Foreign Accounts Tax Compliance Act” (FATCA) went into effect. But instead of raising income tax revenue by more than $800 million per year, as its promoters claimed it would, it now appears that the government will actually take in far less revenue, as a result of FATCA.

According to a March 2010 report from the Joint Committee on Taxation, FATCA was supposed to raise more than $800 million in revenue from the foreign held accounts of U.S. citizens. However, it’s now becoming obvious that the Committee seriously failed to consider the motivations of both foreign bankers and U.S. citizens, living abroad.

Of course, the U.S. government can’t “force” foreign banks to do anything. IRS enforcement rights end at our borders. So for example, the U.S. government can’t impose a direct fine on those foreign banks. But FATCA attempts to impose what is effectively, an indirect fine on non-compliant banks, in the form of an extremely punitive tax on the bank’s U.S. investments. In other words, bank earnings generated in the USA would be tax at a punitive rate, before it would ever leave the USA. The proponents of FATCA incorrectly thought that all foreign banks would rush to comply with FATCA, in the way they proposed, rather than pay that hefty tax on their U.S. investments. Well, although they were partially right, it hasn’t exactly worked out the way they planned.

You see, the tax and spend crowd is comprised almost exclusively of politicians who have never spent a single day running a business, where they had to make a profit or lose everything. So it’s not surprising that these business neophytes failed to consider that there were several other options for those foreign banks than just the option that they wanted those banks to take. The option that they hoped the banks would take was to simply start reporting the details of the banking activity of their U.S. clients and to start withholding U.S. income tax and remitting it to the IRS. It sounded simple enough to simple-minded politicians.

But only a very tiny handful of banks have moved in that direction and some of them have already reversed course. Instead, the options chosen by almost all foreign banks have fallen into one of two categories.

Both of those options serve exactly the opposite of the desired effect. Let’s take a look at them one at a time.

The first option means less foreign dollars supporting U.S. businesses and U.S. jobs. This will have a negative effect on the U.S. economy. But in general, since the only banks that can afford to take this option are smaller banks that tend to be more agile, the negative effect will be somewhat limited.

On the other hand, the huge number of banks taking that second option is already having a devastating effect on our economy. As we reported in May of this year, formal citizenship renunciations by wealthy U.S. citizens, which had reached a record low in 2008, are now up by more than 1700% since Obama assumed office. Obama’s “soak the rich” agenda has been largely to blame for this disastrous rise. But FATCA has complicated it even more. 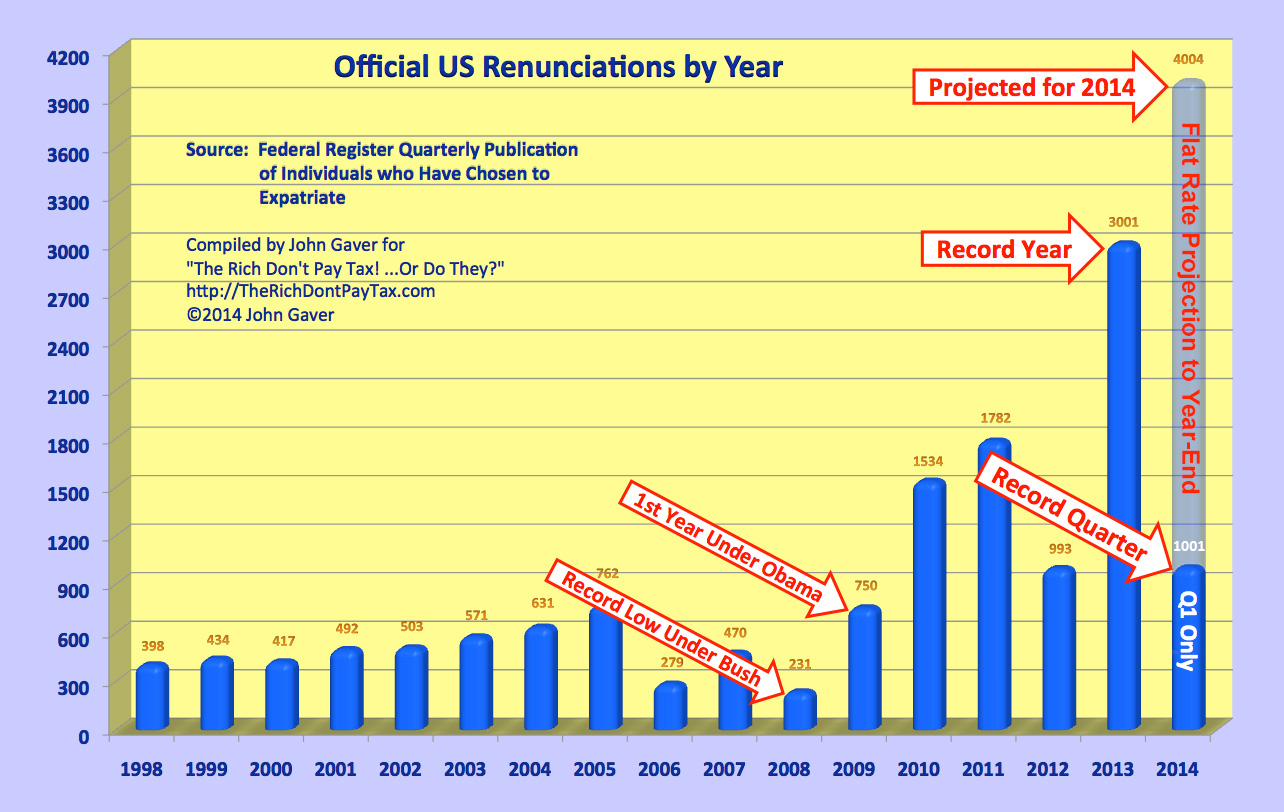 Hover over image to view at full size.

You see, there are millions of U.S. citizens currently living and working offshore. Millions more are retired offshore. And of course, we can’t forget the American businessmen who run businesses offshore. But there are two things that these people all have in common. First, by retaining their U.S. citizenship, they must continue to pay U.S. income taxes. Second, they all maintain a residence and incur monthly bills offshore – bills that, for all practical purposes, must be paid with a check or deposit from a local bank and therein, lies the rub.

Within the last year, millions of U.S. citizens who work and maintain a residence offshore have been told by their local bank that their business is no longer welcome, because they are U.S. citizens. The banks have chosen to comply with FATCA by not having U.S. clients.

Now keep in mind that even those U.S. workers, who go offshore for what would be considered a low paying job in the USA, are probably earning a premium wage offshore. Though it’s not common, it’s not uncommon for salaries in some fields to be three times what the same job would pay in the USA. But one and a half to two times is more common. The point is that all of these people have a very strong financial incentive to stay where they are, for as long as the job lasts. Retirees, on the other hand, have planned for years where they want to retire and are not going to be willing to move back to the rat race.

So what happens when these people can no longer pay their bills, in the country where they live, because no local bank will accept their business?

Many U.S. citizens who might never have thought of renouncing their U.S. citizenship are now renouncing. They realize that it was their own government that put them in this unenviable position and they wonder what’s next. For many U.S. citizens living offshore, FATCA has become the tipping point.

It’s sad that, on this July 4th, while we celebrate U.S. Independence from England, more and more disenchanted U.S. citizens are declaring their independence from the USA. What makes it even more sad that this is all because our elected representatives, who are already spending far more money than the government takes in, felt it necessary to try an inane scheme like FATCA, to get even more money to spend.