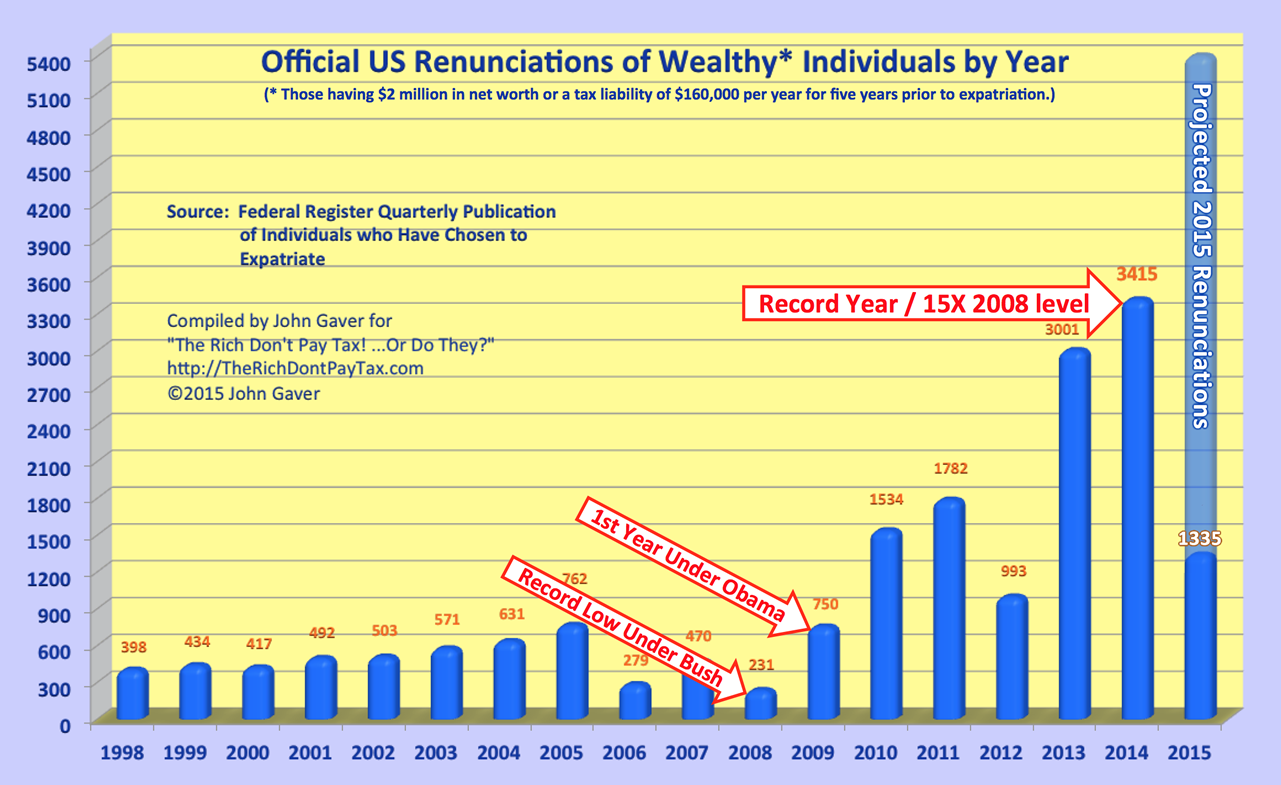 Hover over image to view at full size.Renunciation of wealthy U.S. Citizens reaches new quarterly record high. (This frame may be scrolled if it doesn’t fit your browser window.)

Wealthy Americans are rushing to dump what was, not so long ago, one of their most treasured possessions – their U.S. passport.

In five of the six years since Obama took office, we have seen significant increases in the number of wealthy U.S. citizens who have shed their U.S. passport. Furthermore, in each of those years, the year-to-year increase was greater than the single greatest year-to-year increase of any president, before he took office. The only year renunciations of the wealthy dropped, was 2012, which was the year Obama was running for re-election year. A lot of people who were considering renouncing, probably delayed their departure till after the election, in the hope that a new president would stop attacking success. This hypothesis is reinforced by the fact that formal renunciations of the wealthy climbed sharply in 2013 and again in 2014, when renunciations of the wealthy hit a record high of 3,415 formal renunciations – roughly 1,500% higher than the single-year rate Obama inherited.

There are many reasons why one might choose to renounce his U.S. citizenship. But it’s becoming increasingly clear that the biggest single reason behind this latest rash of renunciations is the Foreign Account Tax Compliance Act (FATCA), which was passed as a part of the Hiring Incentives to Restore Employment Act (HIRE – H.R.2847). The intent of FATCA was to force foreign banks to disclose highly detailed account information on their U.S. customers and require those banks to withhold taxes from the accounts of their U.S. customers and forward those taxes to the IRS. By the way, had the government demanded the exact level of detail from U.S. banks, as they demand from foreign banks, it would be clearly unconstitutional. In order to get around the fact that the U.S. government has no legal authority in other countries, FATCA imposes extremely punitive taxes on the U.S. transactions of any non-compliant foreign bank.

FATCA shows the short-sightedness and lack of business acumen in the halls of Congress. They naively thought that all foreign banks would just roll over on command of their U.S. government masters and gleefully start reporting on all of the financial affairs of their U.S. citizen customers. But it didn’t work out that way. Those who voted for FATCA failed to consider the business of banking. It is a historical fact that banks, both foreign and domestic, are in the business of loaning money and of protecting two things – their client’s money and their client’s privacy. Any bank that fails to protect either, won’t have the deposits to be able to loan money and therefore, won’t be in business long. So instead of turning over all of the demanded information and in order to continue to protect the privacy of their clients, foreign banks chose the only way that they could both maintain their reputation for privacy and remain compliant with FATCA. They began sending out what many U.S. Expats now simply call, “The Letter.” It’s a letter wherein the bank informs their U.S. clients that they have 30 days (more or less), in which to find another place for their money, because the bank no longer able to deal with U.S. citizen customers.

The result of FATCA has been that rich and poor expats, alike, are facing serious banking issues. There are roughly 7.6 million U.S. citizens who live outside the USA. Many are on temporary work assignments, while others are long-term expats. Some are retirees, who chose a low-cost nation in which to retire, to make their savings go further. Others are married to foreigners and have settled permanently in another country. But whatever may be their reason for being abroad, for one reason or another, they all still carry a U.S. passport. However, that passport has gone from being a thing of pride, to being a heavy burden. As a result of FATCA and the resultant very predictable actions of foreign banks, many U.S. expats are unable to pay their rent, electricity bill, or phone bill. All of those things typically require a local checking account, which in many locals, are just not available to U.S. citizens. Some American expats, who want to start a business, are finding that loans aren’t available to them, either. Worse yet, many foreign born spouses of U.S. citizens are finding their business accounts being closed, because of the U.S. spouse.

Most of those people aren’t anywhere close to wealthy. But they were not the targets of FATCA. They were just collateral damage. They’re just U.S. citizens that our tax and spend politicians hung out to dry, in a vain effort to collect more taxes from people who don’t use any U.S. services. The politicians probably thought it was safe to ignore them, because most of them don’t vote in U.S. elections. In fact, long-term expats, who have no U.S. residence have very little representation in Congress. But all of those problems relate only to Americans who live abroad. The problem for we “home-landers”, as the expats refer to us, is that to be on one of those lists, you have to be a “covered expatriate”, which is a convoluted way of saying, “rich”.

I’m not saying that every name on those lists represents someone who is rich. There are some mistakes on the lists. After all, they’re made up by government workers, so by definition, there will be mistakes. There may also be a few expats who made the lists because they failed to fill out a Form 8854, upon renunciation. But it’s unlikely that there will be many of those, since failure to file that form not only puts your name on the Taxpat Lists, but makes you liable for the Exit Tax that George W. Bush signed into law in 2008. In reality, the lists should be at least 95% accurate, when referring to wealthy expats. After all, even if 50 names of less-than-wealthy expats managed to slip onto this quarter’s list, that would amount to less than 4% of the total number. So while the lists may not be 100% accurate, the errors are statistically insignificant.

So why should we be worried about this development? Consider this. The top 1% of taxpayers pay 38.09% of all personal income tax collected by the IRS; that’s AFTER all tax breaks and even any possible cheating. They are also the people who create the lion’s share of the jobs in the USA. When they leave, they take their tax base and jobs with them. While the rich don’t make up that large a percentage of expats, they make up a more than five times greater proportion of expats than they do of Americans in general. According to the 2014 HSBC Expat Explorer Report (see page 4) those who earn more than $250,000 per year make up barely 1.25% of all U.S. citizens, but they make up 7.0% of all expats.

Sure, it would take a lot more for this to become really serious. But look at the way renunciation is trending. The quarterly average for renunciations in 2008 was just 57.75. What this means is that in excess of 2300% more Americans chose to renounce their U.S. citizenship in the first quarter of this year, than the quarterly average for the year before Obama assumed office. At the end of last year, that increase was 1500%. It’s getting worse.

There has always been a trickle of renunciations over the years and the reasons for those renunciations have been varied. But it seems clear that Obama’s “Soak the Rich” agenda and FATCA are playing a large part in forcing many U.S. citizens to renounce their cherished U.S. citizenship. Expatriation for tax purposes has been called “Taxpatriation”. Forced expatriation due to unbearable FATCA limitations can now be called “FATCA-Patriation”.

In the worst year on record, prior to Obama taking office, there were only 762 names on the four quarterly lists for the entire year. Do the math. What this means is that in just the first three months of 2015, the number of renunciants almost doubled the number for the worst whole year before Obama became president. Projecting this trend forward, if this geometric increase in renunciations of our wealthiest taxpayers continues, we could easily lose the people who pay 10% to 15% of our tax load, by the time Obama leaves office. You and I would have to make up the difference, in the form of higher taxes.

There was once a time, not so long ago, when a U.S. passport was one of the most valuable documents an international traveler could have. When you handed hotel clerks or airport personnel your U.S. passport, you used to be able to see an instant attitude of change from that of “working drone” to that of “respectful attendant”. If you had a problem and had to call the police, they would treat you with a heightened level of respect, as soon as they realized that you were American. But all that has changed.

Today, your U.S. passport gets you no special respect. In fact, in a terrorist situation, a U.S. passport is considered to be the second most dangerous document you can carry – right behind an Israeli passport. At the current rate, we could see more than 5,000 renunciations this year. It used to be that anyone who had a U.S. passport wouldn’t think of giving it up. Today, many Americans are having to work hard to think of reasons to keep their U.S. passport.

The FairTax (H.R.25 & S.155) would not only give those U.S. citizens, who are considering renunciation, a reason to stay, but it would be a huge wealth magnet, drawing in wealth from around the globe. The more wealthy people we have paying taxes in the USA, the less tax the rest of us have to pay and the more higher paying jobs we will have, when those people invest their wealth.