It’s official. Obama has achieved the ominous distinction of becoming the first U.S. president to have had more than 10,000 very wealthy taxpayers renounce their U.S. citizenship under his watch. Worse yet, he still has two more years to run these numbers far higher. According to the combined “Quarterly Publication of Individuals, Who Have Chosen To Expatriate” reports published in the Federal Register, since Obama assumed office the exact number of so-called, “covered expatriates,” on September 30, 2014, was 10,413. 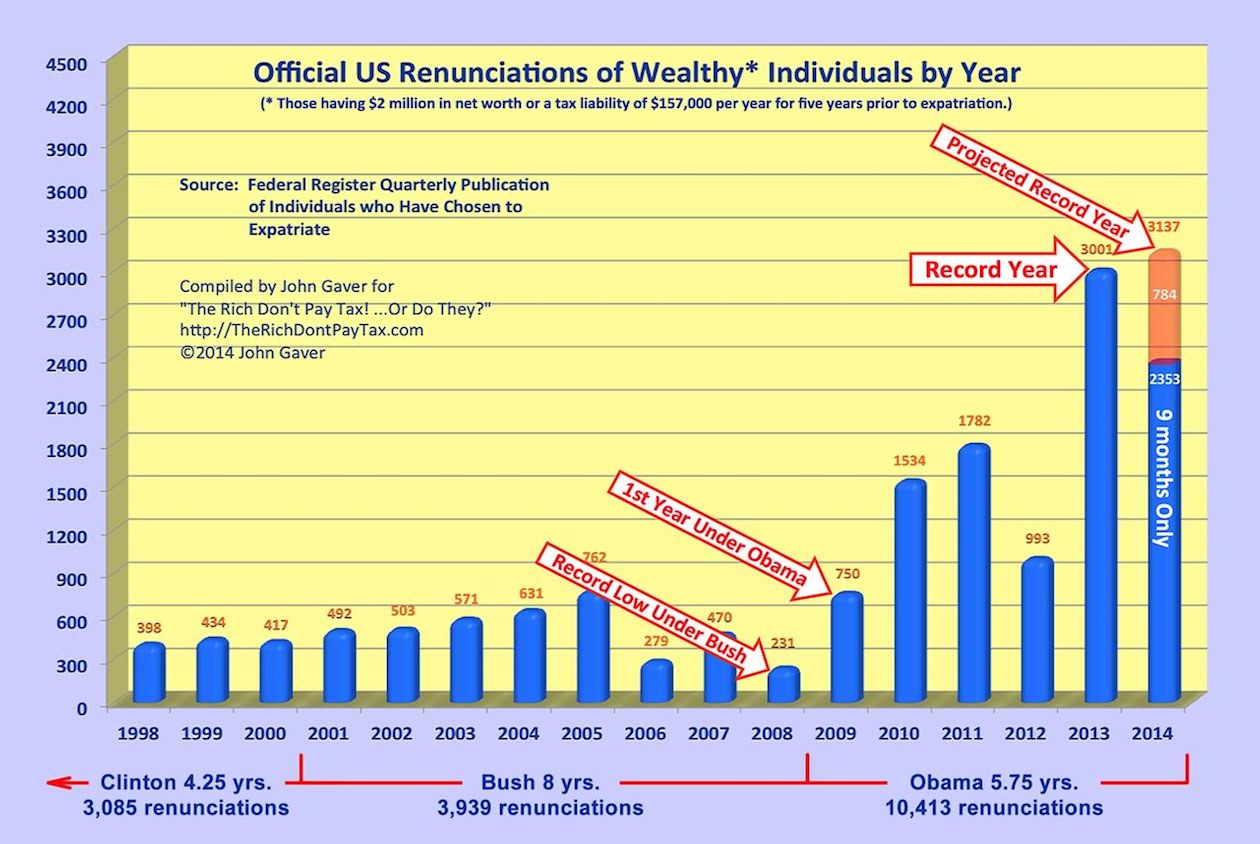 Hover over image to view at full size.
Renunciation of U.S. Citizenships continue to climb (This frame may be scrolled if it doesn’t fit your browser window.)

It’s important to emphasize that these lists represent only wealthy expatriates. Under 26 U.S. Code § 6039G (originally the Health Insurance Portability and Accountability Act of 1996), which is the law that created these lists, in order to have one’s name appear on one of those quarterly lists, a person must meet the criteria for “covered expatriate”, which is the government’s way of saying, “rich”.

A “covered expatriate“ 1 is any expatriate who had a net worth of at least $2,000,000 (in current dollars) on the date of expatriation or had incurred a tax liability of $157,000 per year (based on 2014 dollars and adjusted annually) in each of the five years prior to expatriation. The IRS reports that the top 1% of income earners pay income tax at an average rate of 23.5%. So using that tax rate, an individual with such a tax liability would have to earn in the vicinity of $668,000 per year or roughly double the income floor to be in the top 1% of income earners.

Think about that last statement, “our most prolific taxpayers.” When the wealthy leave, it causes a disproportionate loss of tax revenue, that must be made up by those of us who remain. Since the wealthy are most often job creators, it also means that many of the jobs that they create will move offshore, as well. According to the latest IRS Collections Data, the top 1% of income earners pay 35.06% of all personal income tax collected in the USA. Based on that figure, if all of the top 1% of income earners were to leave the USA, the government would have to increase taxes on the rest of us by roughly 54%, just to stay even and that’s before considering the lost jobs that would go along with it.

Now certainly, not all of the top 1% of income earners would leave. But even if only a small percentage of them were to leave, it would force income taxes up for the rest of us. Would you like to see your taxes go up just 10%? That could happen if just over one-fifth of that top 1% were to renounce. Also consider that, while that top 1% are leaving, many only somewhat less wealthy taxpayers are leaving, albeit with much less fanfare. If one-fifth of say, the top 5% of income earners were to leave, your taxes, along with everyone else’s, would be forced up 26%. Then think about the fact that we haven’t even begun to consider the top 10% of income earners.

The fact is that these are very conservative numbers. Look back up at the chart at the top of this page and consider that these numbers represent just those wealthy expats in the top 1%, who formally renounced. Then consider that many more, such as Tina Turner, lose their citizenship through “relinquishment,” which is not recorded on these lists. There are also others, who choose the “PT“ 2 route, who just effectively drop off the financial radar of the USA, without renouncing. It’s only reasonable to assume that other forms of expatriation are increasing at rates similar to formal renunciations. So, at the rate formal renunciations of this income group are increasing, this could be just the beginnings of an economic disaster.

The point is that these expats, be they formal expatriates or PTs, are the people that this nation needs in order to insure sufficient continued tax revenue and to create the jobs that keep our nation running.

It doesn’t matter whether you see this flight of wealthy Americans as justified cause and effect or as a lack of patriotism. That’s because what you or I think about it isn’t going to change a thing. Our most prolific taxpayers will continue to renounce at the highest rate in history, as long as liberty, opportunity, success, low taxes, and small government remain anathema to our current leadership. Those expats don’t see themselves as fleeing the USA, but rather, as fleeing a government that has become hostile to the the principles upon which this nation was founded. They’re fleeing an IRS that makes up its own rules as it goes along. They’re fleeing a government that has forgotten due process. The only thing that will stop this flight of wealth is a return to a smaller, responsible, representative government that doesn’t punish success.

Interestingly, one of the reasons why many of these top taxpayers are leaving are government attempts like these, to force them to stay. The “tax and spend” crowd in Washington thought that these lists would be a way to “name and shame” any wealthy taxpayer, who had the audacity to legally flee the oppression of his government masters. The flawed logic of this law was that these lists would be seen as identifying those who were somehow “unpatriotic” and that by publishing the names of those wealthy taxpayers who renounced, it would shame others into staying. It didn’t quite work out that way.

In fact, many wealthy expats now see having their name on one of those lists, as a badge of honor, signifying that they were smart enough to get out before things got really bad. Supporters of the “name and shame” concept started calling the lists the “Taxpatriot Lists” or “Taxpat Lists”, hoping to further tie the lists to some perceived lack of patriotism. But like the American Revolutionaries, who turned “Yankee Doodle” from a British slur, into a statement of American pride, expats adopted the term, “Taxpat” as their own way of telling the world that they were forced to leave their home by an oppressive government.

But these lists are just one of many failed attempts by the federal government to force wealthy taxpayers to stay within their tax jurisdiction. A 10-year expatriation tax (1996) failed so miserably that even many of it’s supporters ultimately admitted that its effect was the exact opposite of what they expected and it was replaced in 2008 by Bush’s first ever U.S. Exit Tax, which has also failed in a big way. The 1996 “…And Don’t Come Back!” law, as it was dubbed by Forbes Magazine, threatened to permanently bar wealthy expats from ever returning to the USA, for any reason. But that law too, seemed to have actually encouraged more renunciations.

The problem with all of these failed attempts is that they were aimed at punishing people for leaving, instead of rewarding people for staying. Think about it. If each law they pass is progressively more punitive, what message is that sending? It’s telling the people at whom those laws are aimed (the rich), that you should get out, before it gets worse.

If our lawmakers were serious about reversing this dangerous trend, they would start crafting bills that reward staying here. In fact, there is one bill already sitting in committee, in both houses of Congress, that would go a long way toward resolving reversing this dangerous trend. The FairTax would eliminate the income tax and IRS and replace them with a revenue neutral, progressive national retail sales tax. This would not only address the tax issues that are driving the wealthy offshore, but it would draw jobs and foreign investment back into the USA, where spending generated from those jobs and investments could be taxed. An additional advantage to the FairTax would be the fact that by eliminating the IRS, it eliminates the enforcement arm of Obamacare and without enforcement, Obamacare will collapse from its own weight.

The top 10% of income earners pay roughly 70% of all personal income tax collected. But by punishing and threatening them we are driving out this critical group of taxpayers and employers. History has proven that punishing success and expatriation never works, but rewarding success and citizenship always works. The difference is that punishment empowers lawmakers, while reward empowers citizens. Maybe that difference explains why our lawmakers continue to employ punishment, instead of reward.

2) The term “PT” is a popular slang among expats, indicating a person who has dropped off the government’s financial radar. It has several meanings, including, “Practically Transparent,” “Prior Taxpayer,” “Privacy Trained,” and “Permanent Tourist,” among others.