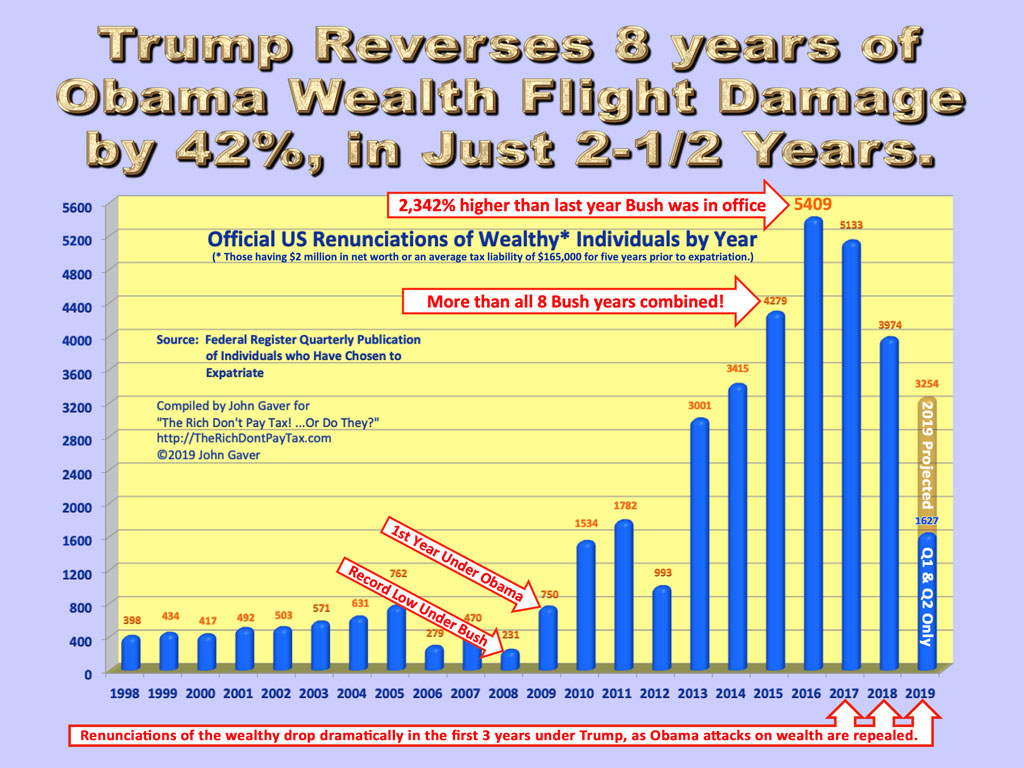 In eight years Barack Obama’s “Soak the Rich” policies drove formal renunciations of our most prolific taxpayers to a previously unimagined 2,342% increase. But it has taken President Trump just two and a half years to reverse the Obama damage by a whopping 42%, based on the latest official numbers from the IRS.

The IRS has released the official quarterly report of what has become popularly known as, “The Taxpatriate Lists” or just “The Taxpat Lists”, for short. The official name is, ““Quarterly Publication of Individuals, Who Have Chosen To Expatriate””. That quarterly publiction lists the names of every very wealthy person who formally renounced his citizenship in the prior quarter. To be more specific, to be included on one of those lists, an individual must meet the definition of a, “Covered Expatriate”. That definition is based on wealth and/or income.

Some people reading the above definition might point out that an expat, who is not rich, could make it onto one of the lists, by failing to file Form 8854. However, that’s extremely unlikely, since there is a punitive financial obligation that goes along with being a “Covered Expatriate”. That obligation takes the form of an Exit Tax, implemented by President George W. Bush, as part of the “Heroes Earnings Assistance and Relief Tax Act of 2008 (H.E.A.R.T.)“. So this means that an expat who is not rich, but fails to file that form, would suddenly become liable for the Bush Exit Tax.

So ask yourself, “If simply filling out and submitting a form was all it took to legally avoid paying a punitive tax, for which you are not liable, wouldn’t you file that form?” Think about it…

The point here, is that, while it’s technically “possible” to be considered a “Covered Expatriate”, without being rich, it’s extremely unlikely that any expat who is not liable for the Bush Exit Tax would not fill out that one form. For someone who is not rich, it comes down to, either fill out one form or pay a mark to market capital gains tax on your entire net worth. It’s a no-brainer.

But the income requirement is actually worse than it sounds, at first thought. Notice that the income requirement is based on tax liability, not actual income. If we start with an expat who barely meets that $165,000 tax liability and then use IRS collections data (link opens/downloads spreadsheet from IRS), to work backwards, we find that it would require an annual income of more than $700,000, in order to owe $165,000 tax. But the same IRS collections data tells us that to be in the top-earning 1% of income earners, a taxpayer had to earn only $515,371, in 2017. So this tells us that everyone on the Taxpat Lists are most likely very safely in the top-earning 1% of income earners.

So why is this important?

This is not just important, but critical. The above referenced IRS data makes it clear that, in 2017 (the last year for which that data is available) the top-earning 1% of income earners paid 38.47% of all US income tax actually collected. Furthermore, when compared to their income, that comes out to be almost double their share of income tax (1.83 times their share, based on their share of total income).

So what all this means is that every time a wealthy person renounces his or her US citizenship, we lose a disproportionately high amount of our tax base. That’s one of the reason’s why this phenomena is referred to as “Taxpatriation”. The people who are leaving end up paying tax in their new country, instead of in the USA.

Obama’s “Soak the Rich” agenda drove 21,163 wealthy expats (Covered Expatriates) to renounce their citizenship, representing a 2,342% increase over the expatriation rate that he inherited. Although that’s an astounding increase, a less than thorough look at what this means might lead one to believe that it’s not serious. After all, there are 1.4 million taxpayers in that top-earning 1%. But making that assumption would be would be a huge mistake.

Consider this. If Hillary had won, in 2016, she would have certainly continued Obama’s attacks on wealth. In fact, she promised just that. So let’s look at what would have happened if formal renunciations rose at the exact same rate for eight more years.

The last year Obama was in office, there were 5,409 formal renunciations of the rich. So multiply that number by the 2,342% eighth year increase from the Obama era and you see that in eight years, the number of taxpatriations in that next eighth year would be 126,679. That’s 9% of the number of taxpayers in the top-earning 1%. Have I got your attention?

However, if that second 8 years had happened, it would probably have been much worse, because of the snow ball effect. By this, I mean that, as more and more wealthy taxpayers flee the USA, that alone would become an additional reason for more and more wealthy and nearly wealthy taxpayers to follow. It would be like a giant snow ball, rolling down hill, gathering more and more snow as it goes, eventually becoming an avalanche. But even ignoring the snow ball effect, when we consider just how fast this could happen, it’s down right scary.

Why is it so scary?

EVERY Democrat presidential candidate for 2020, is proposing some kind of wealth tax.

OK. Now I’m sure I have your attention.

But it’s worse even that it sounds. The least aggressive of these Democrat wealth tax proposals is far worse than anything that Obama actually implemented!

To learn just what it would mean for us less-than-wealthy taxpayers, let’s examine what would happen if just the top-earning 1% of taxpayers were to actually renounce their citizenships. It would mean a 63% tax increase for those of us who remain!

You read that right.

Let’s do the math.

When the government loses revenue from any source, they have to make it up from some other source. The government isn’t going to cut services or spending by 38.47%, just because they lost the 1% of taxpayers, who provided that 38.47% of annual revenue. That means that when the government can no longer tax those who provided 38.47% of annual revenue, they are just going to have to raise taxes elsewhere and that means raising tax on those of us who remain, to make up the difference. If the amount lost is 38.47%, it means a whopping 63% tax increase for the rest of us. The real problem is that the only people who could afford a 63% tax increase are those who are no longer here.

Slowing down expatriation of the rich is great…
But it’s not enough.

Tremendous damage has already been done. As a result of Obama’s ineptitude, we lost 21,163 of this nation’s most prolific taxpayers. Furthermore, despite Trump’s Herculean efforts to undo the damage done by Obama, all that he has been able to do so far, is to “reduce” ongoing damage. There will still be a projected total of 3,254 wealthy taxpayers renouncing this year, which is about 3,000 more than would be expected, had Obama not done such damage. Keep in mind that there were only 231 formal renunciations of “Covered Expatriates” in the year before Obama took office.

It’s absolutely amazing that President Trump has been able to slow down the flight of wealthy taxpayers as much as he has. But since Obama did such tremendous damage, even if President Trump could completely halt further renunciations of the wealthy, it wouldn’t be enough. There are still 21,163 Obama Taxpatriots, plus another 10,734 who have left in the last 30 months, living in other countries and paying taxes there, who we need to entice to return.

Slowing taxpatriation is great. But reversing it is what is called for.

Fortunately, there is a solution that would do exactly that and it’s currently sitting idle in the Ways and Means Committee. It’s H.R.25 – The FairTax Act of 2019.

The FairTax, by eliminating the income tax and the IRS, and moving the USA to a progressive sales tax, collected only at the cash register, would make the USA a giagantic wealth magnet. Not only would those Obama Taxpatriates and other taxpats be encouraged to bring themselves, their wealth, and the jobs that wealth created back to the USA, but it would attract wealthy individuals from other countries, to bring their wealth to the USA and invest it here.

Certainly, not all those who left could be encouraged to return. But the wealthy foreigners, who would be seeking citizenship or legal permanent residence in the USA, would way more than make up the difference.

So instead of us less-than-wealthy individuals having to pay higher taxes for all those wealthy taxpatriates, we could all be paying less tax, since there would be so many more wealthy people in the USA, buying high-ticket items and paying tax on those purchases, at the time of purchase.

Learn more about the FairTax at, Americans for FairTaxation.

Also, read “The Rich Don’t Pay Tax! …Or Do They?“. It goes into much more detail about the issues surrounding the phenomena of taxpatriation.