Ted Cruz has sold out to the GOP Establishment. Since he has no path to the nomination, there could be only one reason why he is staying in the race. He wants to show the Establishment that he is now ready to start being a good “Team-Player” and play by their rules. There is no other explanation.

The writing is on the wall for Ted Cruz. He knows that his campaign for the Oval Office is over. There is just no way that he can reasonably expect to reach 1,237 delegates before the Convention. Trump is about to take Florida and Ohio, meaning that Cruz would have to win 65% of the remaining delegates. Moreover, Trump will win most, if not all of the populous northeastern states. Therefore, Cruz would have to win far more than just 65% of the vote in the remaining states. He has to know that his campaign is over. But in typical Ted Cruz fashion, he is looking out for number one.

Since taking his U.S. Senate seat (for which I campaigned heavily, I should add), it has always been about advancing his political career, at the expense of promises he made to the voters of Texas. All indications are that he began running for President on the day he took his Senate seat. But since he now knows that he won’t be the nominee, he is obviously angling for better Senate committee assignments and other perks of power that the RINO Establishment can toss his way,… IF he plays ball. Maybe, if he makes like a good little RINO, for a few years, they’ll let him be the nominee in the future (after he owes enough political favors to the GOP Establishment).

Let’s be clear. The GOP Establishment (sometimes referred to as GOPe) doesn’t want Cruz to be the nominee any more than they want Trump to be the nominee. Nobody in the Senate likes Cruz. Not a single senator has endorsed him. He is seen as loose cannon and untrustworthy, by members of his own house. Ted Cruz knows this. But he also knows that staying in the race will endear him to the RINO Establishment.

You see, what the GOP Establishment wants now, is a brokered convention, where Party Leaders (i.e. the Establishment) will effectively choose our nominee. First they backed Jeb Bush. Then they backed Marco Rubio. But both of those campaigns have faltered. They would probably be fine with Kasich, but his campaign barely got out of the starting gate. The only remaining option for the GOP Establishment, to give the nomination to one of their own, is to have a brokered convention.

The problem is that historically, a brokered convention NEVER turns out good for the voters. At a brokered convention, the nominee will almost certainly be a “compromise candidate”, who was not even in the race, prior to the convention. (That conclusion is based on history). Such a choice is the ultimate betrayal of the voters. It means that all our votes mean nothing. The nominee would be selected by between 1,237 and 2,472 people, who are delegates to the National GOP Convention and those people are filtered through what is sometimes referred to as the “paid his dues” filter, at the state conventions. Unfortunately, “paid his dues” is really just code for “Proven Establishment”.

In almost every state, NOBODY is selected as a delegate to the National Convention unless he or she has been a loyal party activist for decades (paid his dues). These are the same people who supported candidates like McCain and Romney, in past years, and who supported Bush and Rubio, in this cycle, before their campaigns imploded. These are the same people who defend Reince Priebus. Out of a crowd like this, Ted Cruz would be lucky to get 10 delegates loyal to him at the national convention. Therefore, having no path to 1,237 delegates before the convention and no chance of winning at a brokered convention, Ted Cruz must have an ulterior motive for staying in the race. Sadly, the only possibility is that he is endearing himself to the GOP Establishment and collecting markers that he can call in, the next time he sees a chance to increase his own political power. But let’s get back to the brokered convention, for which Cruz is pushing.

How would you like to see Mitt Romney as the GOP nominee? Think that’s far-fetched? He just re-activated his campaign accounts. Then there is the new Draft Paul Ryan SuperPac that just filed organization papers. The would-be nominees are getting in line, in hopes of a brokered convention. The back-room boys would have a field day at a brokered convention, because it gives the GOP Establishment carte blanche to nominate whomever they choose.

This control is all made possible by control of the Rules Committee and maybe even the Credentials Committee. Worse yet, remember those “paid-their-dues” people we talked about? Well to be one of the few people to get on one of those committees, out of the 2,472 who have already been determined to have paid their dues, your loyalty to the Establishment must be beyond reproach. It’s a system that insures that almost all delegates to the national convention, as well as members of important committees, will do the bidding of the Establishment and the few who don’t are irrelevant. Ask any former Ron Paul supporter about the Rules Committee or the Credentials Committee and you’ll get an ear-full.

Having been a delegate to many GOP conventions, I can assure you that back-room deals are where almost all important decisions are made. At a brokered convention, those back-room deals are where the candidate will be selected. So instead of 1,237+ delegates selecting the candidate, it’s only 20 or 30 Establishment insiders, who pick the nominee and 1,237+ delegates just rubber-stamp that selection.

But there is one thing that, if I were a gambler, I would bet big money on.

If there was to be a brokered convention, the second name on the ticket would be Jeb Bush.

Whoever ultimately was selected by the Establishment would be someone who would select Jeb Bush as his running mate. So if we were to have a brokered convention, GOP voters would end up with an as-yet-to-be-named Establishment GOP Nominee, with Bush, as the heir-apparent, to run, yet again, in 8 years. Remember, that’s how we got George H.W. Bush. Of course, this is all assuming that such a ticket would win, which would be extremely unlikely, since many of those betrayed voters would stay home.

THE VOTERS ALWAYS LOSE IN A BROKERED CONVENTION.

Both Ted Cruz and Marco Rubio know this. Rubio has been an Establishment puppet all along. But for Cruz, this is a new thing. He ran for the U.S. Senate as the anti-Establishment candidate, hoping to capitalize on the TEA Party movement and that’s exactly what happened. He fooled me and many other Texas TEA Party voters into voting for him. Unfortunately, he was only using his new Senate seat as a springboard to the presidency, just as Obama did.

Some may question my use of the term “many other Texas TEA Party voters” in the previous paragraph. But before you do, think about this. In 2012, Ted Cruz won 57% of the vote of Texas Republicans, in the primary (and 57% of votes in the general election). It follows then, that if Texas Republicans were even remotely satisfied with his performance, he should have been able to garner somewhere in the neighborhood of 57% or more of the vote, in his home state primary this year. He got just 43% of the vote – not even a majority. Do the math. Ted Cruz LOST 25% of Texas GOP voters, who voted for him in 2012, for the U.S. Senate. What does that tell you about how many Texas Republicans now feel about Ted Cruz, just four years after we elected him to the Senate?

It all comes down to the fact that, now that he has no hope of capturing the GOP nomination, Ted Cruz is still using his campaign to advance his political aspirations, by demonstrating to the GOP Establishment that he can be a “Team-Player”. For Cruz, it’s no longer about becoming the nominee. Ted Cruz is clearly willing to sacrifice the general election to Hillary Clinton, in order to gain political points with the Establishment, for himself. With Cruz, it’s always about himself. The same could be said for Rubio, except that he is no longer relevant and will be out of the race after he loses Florida. 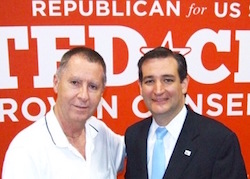 I once supported Ted Cruz. I deeply regret having done so.

I would like to conclude by apologizing to Republican voters for having helped Ted Cruz win his U.S. Senate seat. My only excuse is that Cruz is one of the best liars I have ever encountered. In fact, I would go so far as to say that he is probably a pathological liar, since he does it so easily and without any “tells,” to give him away. This article and others about Ted Cruz is my way of doing penance for the transgression of helping him get elected. I urge voters across the nation to consider the above points and save yourself from the morning-after regret that many Texans (probably most of that 25% I spoke of) are now feeling about their past support for Ted Cruz. Please do yourself a favor and learn from my mistake, by voting for the only candidate left in the race, who really is not beholden to anyone in the GOP Establishment. Vote for Donald Trump – not because he is perfect, but because he is the best, of those who are left.