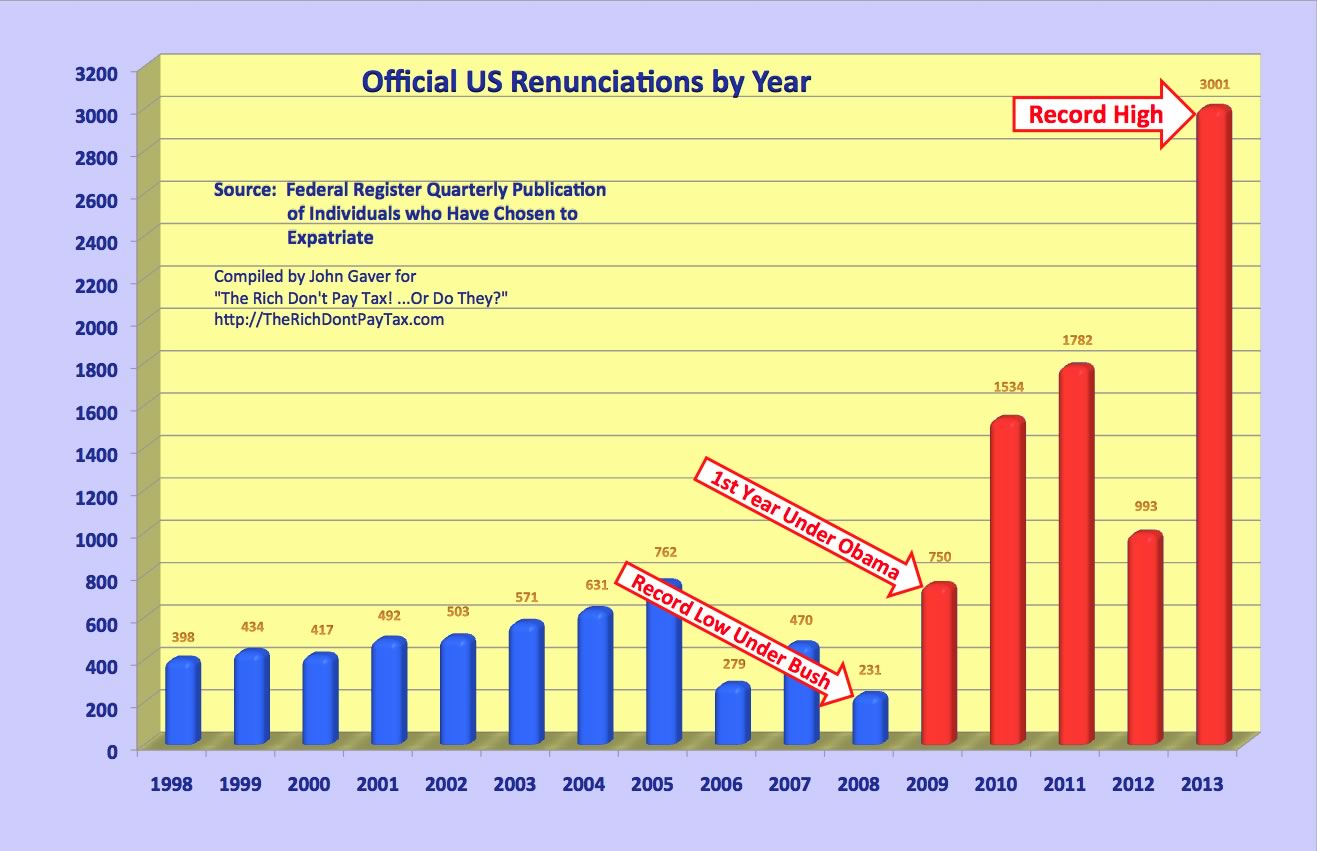 In the last quarter of 2013, the reported* number of people who felt compelled to take the distasteful step of formally renouncing their U.S. citizenship was 632, bringing the total number of renunciations for 2013 to an incredible 3001. What make that number even more incredible is that it’s 1300% that of the record low expatriation rate that Obama inherited from George W. Bush (231 in 2008).

But use your own common sense. Just ask yourself, “How many of those who are leaving are poor and who’s going to pay the taxes that the rich used to pay, after the rich are gone?” After all, according to officially reported IRS Collections Data, the top 10% of income earners pay more than 70% of all personal income tax collected by the IRS. The same IRS data tells us that to be in the top 10%, a taxpayer must earn at least $116,000 per year. Then consider that it would probably be somewhat difficult for most people earning less that that, to give up U.S. citizenship and all the benefits that go with it.

Do you begin to see why driving these people off spells disaster for those who remain?

Let’s look closer at this official data and where it’s headed. Then we’ll look at what it means for those who remain.

To begin with, as the chart above shows, the 2013 total is almost 400% that of the record high seen under the Bush Administration.

The quarterly publications that we’re talking about are supposed to list the names of every person who has formally renounced his or her U.S. citizenship in the previous quarter. However, the names of several very high profile (meaning very rich) expats have never appeared on those lists. These lists, by the way, have become known as the Taxpatriot Lists (or more commonly, the Taxpat Lists), suggesting that most of these people are seeking tax relief by leaving. This further suggests that most of them must be rich.

There’s a very good reason for this conclusion. You see, poor people don’t leave the USA. They can’t afford to leave all the freebies that they get here, provided to them at the expense of more productive U.S. taxpayers. In fact, poor people come wading across the Rio Grande every day, with their hands already out for free benefits, paid for by hard working U.S. citizens. Furthermore, it’s the rich who are being targeted for even more taxes than they already pay (which by the way, is double their share, based on income), to pay for all those freebies. So put those pieces of information together and what do you get?

But the most important question is, “How much of the tax load is paid by those who are leaving?”

As we’ve concluded, it’s a pretty safe bet that the vast majority of those who are leaving are at least moderately well off. Those who earn less that $116,00 probably account for a statistically insignificant portion of the names on these lists. Consider too, that under our current system, the more wealth a person has, the bigger target he becomes for the IRS. Millionaires and billionaires like songwriter Denise Rich, rock star Tina Turner and Facebook co-founder Eduardo Saverin come to mind. Therefore, those who are expatriating are probably skewed heavily toward those with higher incomes and higher tax liabilities and therein, lies the rub.

Those who currently pay the lion’s share of the tax load are the people who are leaving. As determined above, those who earn more than $116,000 pay more than 70% of all federal income taxes collected by the IRS and that’s the income category of most of those who are leaving. So this brings up the most important question.

When the people who pay 70% of all personal income tax leave, who will pay the taxes that they used to pay?

That answer is obvious…

If you think this isn’t Obama’s fault, think again. Formal expatriations during each of Obama’s first two years in offices broke the previous year to year record increase. In 2007, under Bush, the year to year increase reached a record 1.7 times that of 2006. But it should also be noted that even after that increase, the total was still the third lowest recorded up to that time. Moreover, the next year, expatriations dropped to the record low that Obama inherited, which it should be noted, was the second record low in three years.

During Obama’s first year in office, expatriations spiked more than three-fold, coming within two percent of the previous record high. That’s more than double the worst year to year increase under Bush.

Only one year since Obama took office have formal renunciations of U.S. citizenship dropped. But even that year, the total number of expatriations was much higher than any year before Obama took office. Furthermore, consider the fact that this occurred in 2012, which was an election year. Now we all know what an honorable man Barack Obama is and that he wouldn’t do something as underhanded as order a delay in the posting of some of the renunciation records, to make it appear that expatriations were dropping, leading up to the election. Sure he wouldn’t. And pigs fly, too. 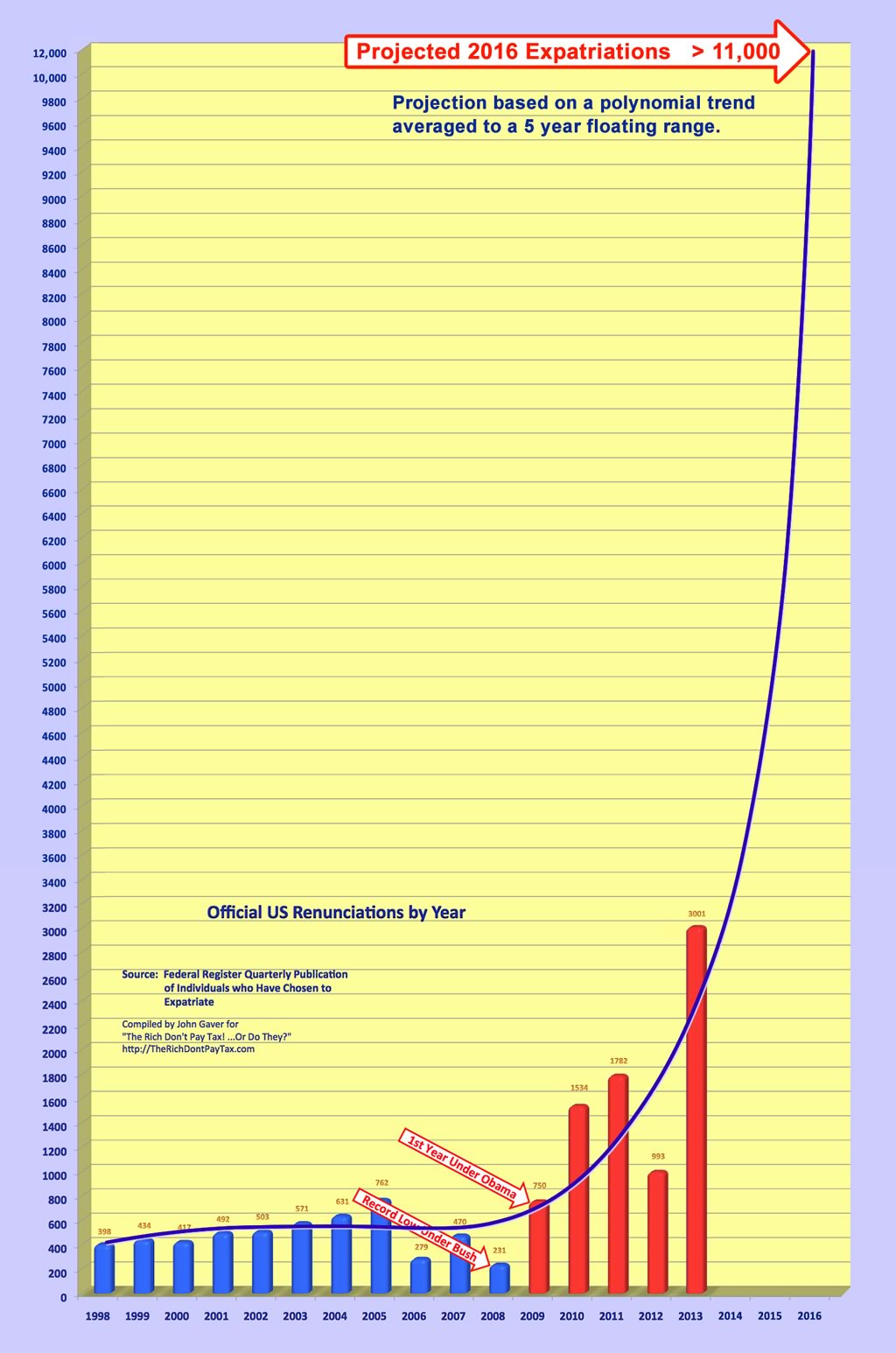 Hover over image to view at full size in a scrollable frame.
Renunciation Projection (This frame may be scrolled.)

This is not coincidence. Look at the trend line. It was level and about to go down, when Obama took office and instead, it turned sharply upward immediately after Obama assumed office and it has continued to break records since. It’s clear that Obama’s “Soak the Rich” agenda is driving those with money to do what they would not have even thought of doing a few years earlier — seek shelter outside of the jurisdiction of the IRS, by giving up their formerly prized U.S. citizenship.

It would be easy to say, “So what? Let’em go. We don’t need’em.” But that would be a great mistake, since we desperately do need them. Remember that the top 10%, of income earners pay more than 70% of all personal income tax and most of those who are leaving fall into this income category.

But it’s actually far worse than the above chart suggests. That’s because, for every one taxpayer who formally renounces his U.S. citizenship, it’s estimated that between 100 and 1000 more U.S. citizens, depending on the politics of the statisticians to whom you listen, just acquire a foreign passport and drop out, without ever filing formal renunciation papers. It’s so common that there’s even a name for such people. They call themselves PTs, meaning Practically Transparent. But the point is that you can probably multiply the numbers on the above charts by at least 100 and probably a lot more, to get the real numbers.

If we are to reverse this flight of our most prolific taxpayers and job creators, we need serious tax reform that will eliminate the ability of any President or Congress, regardless of which party is in power (and they both do it), to punish political enemies and reward big donors, through manipulation of the tax code. Furthermore, as the above chart shows, we need this substantive tax reform now.

Adding more pages to our already convoluted tax code will only make matters worse. Flattening the income tax sounds good at first, till you consider that our current tax code started off flat. In fact, a flat income tax is only a red herring, proposed by politicians who don’t want to give up the power of an income tax. They know that as long as they keep any kind of income tax, adding tax brackets back in and favoring certain donors will be something that they can easily re-insert, in the next term.

By contrast, the FairTax (H.R. 25) will not only reverse this capital flight, but it will create tons of new jobs, as foreign businesses move their production facilities and even their home offices to the USA (roll over for more detail). It’s the only legislation that provides the tools to fix most of the non-spending-related economic problems that ails the USA and not only is it a bill in Congress, but it already has more than 70 co-sponsors in both houses. The only thing that’s keeping it from becoming law is that the leadership of both parties are doing everything they can to keep it bottled up in committee. Those entrenched politicians realize that the FairTax will take away the tremendous power that the income tax has given them in the past and they’re using every political dirty trick in the book to keep the FairTax from getting to the floor of either house.

This nation cannot endure three more years of Obama driving out the people who pay the vast majority of the taxes that support our government. If just half of that top 10% of taxpayers were to leave, the rest of us would be expected to pay more than double our current tax bill, just to stay even. The FairTax is the only thing that will reverse this exodus quickly enough to avoid economic disaster.

For a point-by-point comparison of the various tax reform proposals floating around, see “A ‘Goals-Based’ analysis of tax reform proposals“ on this site. Learn why the FairTax will reverse this flight of our most prolific taxpayers and job creators and how it will positively affect many other aspects of our economy.

* The term “reported” is used near the top of this article, to indicate that the Taxpat Lists are nowhere near complete, since not all expatriations are reported in the Federal Register. There are still ways for an expat to avoid getting his or her name on the list. For example, in the third quarter of 2013, it was widely reported that Tina Turner had given up her U.S. citizenship, in favor of Swiss citizenship. But follow the link above and search the third quarter list for any variation on her name. It does not appear on the third quarter Taxpat List or any other Taxpat List. You see, the Taxpat lists only include the names of those who filed a certain type of formal renunciation. This means that the numbers on the Taxpat lists are significantly smaller than reality, to begin with, before applying a multiplier for PTs. So the actual numbers are likely to be even worse than indicated above. We just don’t have any data to indicate how much worse it may be, so it was not included.